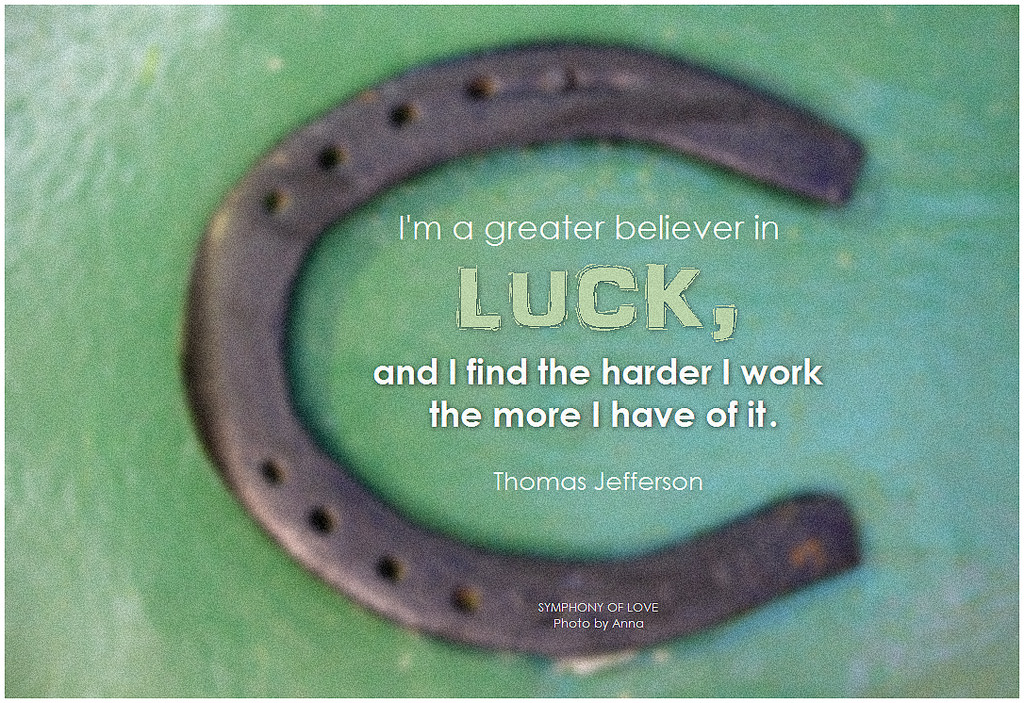 The concept of luck has been in the forefront of my mind all week. On Tuesday there was a storytelling contest put on by the Teton County Library. The topic, you guessed it.

Luck.
It is funny how many people attribute good fortune or luck to their situations in life. Then there are those who don’t think luck has anything to do with it.

Just ask John Guzzwell. I interviewed John for my book. He took on a risky endeavor and sailed around the world solo in 1955 in a 24’ boat he built himself. He had NO modern navigational equipment. He said people told him for years how lucky or brave he was, but he disagreed.

John thinks of luck as a dirty word.

He says it is intangible and it conveys the wrong message.  In his words…

preparation and having a plan is what it is all about.

As I wrote in my book, “luck” is a comforting word that insulates us from our responsibility to take risks; for when we rely on “luck” the responsibility of fulfilling our goals does not fall upon our shoulders, but rather on that ever-elusive “matter of chance”.

When preparation meets opportunity, THAT is called luck.

Thursday afternoon I was inspired to tape and post my first video blog or VLOG. I had been asked to facilitate a meeting and communication exercise with a group of inspiring entrepreneurs here in Jackson Hole that day. The group is called the Start-Up Institute. The instructors coach the entrepreneurs on everything from making a business plan to marketing and execution. The meeting had the goal of helping these individuals with their elevator pitches – the one minute and thirty second explanation of who they are, what their company does and how the consumer can benefit from the company and/or its products.

I listened as the various speakers shared their start-up ideas. The idea of luck kept coming back to me again and again. Would you consider one of these entrepreneurs “lucky” should he or she be invited on the show Shark Tank to pitch their company to investors? Would he or she get “lucky” and make his or her first million dollars in a very short period of time?
I believe that luck is really when preparation meets opportunity. Each of these businesspeople has a passion attached to a great business idea. Based on their presentations, they aren’t just dreaming up an idea and throwing it out there to see if it will stick. They have done their research. They have made a hefty investment in the Start-Up Institute (and in themselves) and they anticipate success.

We each have to do our research and prepare to achieve that which we want to achieve. If you have a dream or want to take a risk and go for something outside of your comfort zone, you must do the work before you take action.

“The harder I work, the luckier I get.” – Gary Player

As I listened to these entrepreneurs I wondered how many of them had butterflies in their stomachs. So I asked them. Believe me, there were enough butterflies in that room to make you think the monarchs had made a stop-over in Jackson Hole on their way from Canada to Mexico. These are bright and motivated folks, yet they were nervous.

They are not alone! I’ve felt the fluttering of butterflies many times before as I stood in front of a room, or sat in front of a camera. If you have a dream and you are nervous about going after it, there are others who have felt those same feelings, so fear not.

I would like to encourage you to press on, and feel the feelings of uneasiness. The goal is to teach the butterflies to fly in formation!

May you continue to take risks and be prepared for the moment when opportunity meets preparation.