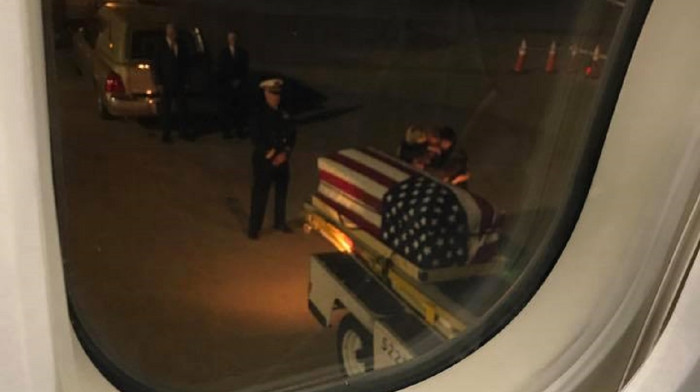 He sat in the window seat of the 737 and barely spoke a word.  When he was offered a beverage during the drink service from Denver to Oakland, he declined.  He sat quietly, gazing out the window at the passing fields and puffy clouds below.

Two flight attendants were cleaning up the cabin when the Captain came on the speaker and asked the crew to prepare the cabin for landing.  That meant they were bound by the FAA to walk through the aircraft and ensure that everyone had his seatbelt fastened, that no seats were reclined, and that all the carry-on luggage was stowed either under the seats or in the overhead bins.

The 20-something year old flight attendant approached the row where this young man sat.  She noticed that he held a wooden box on his lap.  What she didn’t notice was the shape of the box.  As the words came out of her mouth, it dawned on her what could be in the box on this fellow 20-something’s lap.

But it was too late.

She had said it.

“Sir, would you mind stowing that box on your lap under the seat in front of you?”

With a lump in his throat, the young man replied,

“I just can’t, ma’am.  You see, it is the American flag that will be draped over my brother’s coffin when we take it out of the cargo hold in Oakland.”

She stood motionless in the aisle, feeling as if she had been gut-punched, and embarrassed at the same time.

“You can absolutely leave his flag on your lap.  I am so sorry for your loss.”

Upon landing the Captain requested that everyone wait for the passenger in 13F to deplane.  He announced the reason why.  A soldier was onboard, returning home from war, and he deserved our respect.

The only passengers who moved a muscle were 13D and 13E who solemnly and quietly stood up to let a hero’s brother off the airplane.

After all the passengers deplaned, some of them joined the Captain and his crew in the terminal.  They stared out of the windows at the ground crew at Oakland airport.  The ramp workers carefully removed the casket off the conveyor belt.  It was then that a young man, 13F, opened the wooden box, removed the Stars and Stripes, and draped the flag over his brother’s body.

May we always remember those who have served.

May we always remember that although most instances require us to adhere to the rules, there are also cases when a little compassion, some understanding, and the necessity of breaking the rules is paramount.